In the name of Allah, the most gracious and merciful. Surah-Kahf is the 18th chapter of the Quran with 110 verses. Regarding the timing and contextual background of the revelation, it is an earlier “Meccan surah”, which means it was revealed in Mecca, instead of Medina.

Surah Al Kahf has four impressive and exciting Quranic Stories, for the purpose of belief and greatness of Allah. The first story is about As-Haab-ul-Kahf.

The companion of the Cave. It tells the story of the believers in the early times when received the message of Truth and accepted it.

They were to confront retaliation from the general public and henceforth the escape from the city and found protection in a cave where Allah Almighty gave them to sleep for 309 Years till then the whole city had converted into believers.Then Allah reawakens them after this lengthy period.

“and didn’t place therein any crookedness” Therein: i.e. in the Book. “Crookedness” means any kind of deviation, such as the conflict in its wording, contradictions in its meanings, or deviation in its call. You also read Nazar E Bad Ki Dua For Child In English.

Qushayri has said, “[Allah] preserved it from conflicts and contradictions. So, it is a Mighty Book, from a Mighty Lord, revealed to a Mighty Slave.

“Being upright” means impeccable, and reaching the limit of uprightness. And it also means moderate, without any extravagance or negligence.

So, this phrase emphasizes the negation of crookedness, and conveys that this uprightness is one of the essential qualities of the Book; and this is what the grammatical form of the word “qayyim” indicates. Or, the Book’s “being upright” means that it contains.

That which rectifies the worldly and otherworldly life for the slaves of Allah. This second meaning is enforced by the mention of warning and giving glad tidings that follow.

In this case, “being upright” would be describing [the Book] as something that completes something else, after it has been described with perfection. Also reccite Benefits And Importance Of The Holy Quran Short Script.F

Or, “being upright” could refer to the fact that the Qur’an rectifies the previous Heavenly Books, bearing witness to their authenticity and having authority over them.

“to warn” This means that Allah سبحانه وتعالىٰ, or the Book, may cause fear by it. The first meaning is more appropriate as it corresponds more closely to the passage that follows.

In other words, “He sent the Book to warn, through that which it contains, those who disbelieve. “that for them” This means that they will have, as a requital for their faith and works “a beautiful reward.” That “beautiful reward” is Paradise and the excellent rewards that it contains.

Benefit For Surah Kahf (Verse no.2)

“And to warn those who say, ‘Allah has taken a son’” This warning is related to a specific group from among those who were included in the previous, general warning of severe punishment.

“Nor do their fathers” whom they are blindly following (have any knowledge of the matter). Rather, all of them are perplexed and mired in the confusion of ignorance and deviance.

Excellence, in terms of its reality, has a beginning and an apex. It is characteristic of the people of its beginning stages, that they are keen for that which is best for themselves and for the slaves of Allah.

They hope that all of mankind should be among the elect, or at the very least the pious. So, when see people turning away from that which is best, they become sorrowful over those people.

And if the people turn towards that which is best, those of the beginning stages of excellence are happy for the people’s own sake, due to the increase in guidance among the slaves of Allah.

However, it is characteristic of those who are firmly rooted in excellence, and who gain a strong foothold in it, and who obtain the greatest annihilation, that they are not keen for anything, nor do they feel sorrow over lacking anything, neither for themselves or for anyone else.

They have been lightly rebuked for their keenness in their beginning stages, as a means of perfection for them, and an elevation towards the most perfect station.

Allah’s words, “We have made all that is upon the earth …” contain the wisdom in some people failing to reach the station of excellence, so that the person that seeks excellence will be distinguished from the person who turns away from it.

If someone turns towards the adornment of this world and its allure, he will not obtain excellence. But if he turns away from the world and from its beauty, and turns with his heart towards Allah, he will be among the elect who are drawn close to Allah.

Then, Allah embarked upon the story of the People of the Cave, which is the main point of this Surah.

9 Or do you deem that the People of the Cave and the Raqim are our most wondrous sign? 10 When those youths took to their cave and said, “Our Lord! Bestow upon us from You a mercy and grant us guidance in our affair” (Qur’an 18:9-10)

“Or do you deem” Meaning, “Do you, o, Muhammad, believe…?” But the meaning is also a general question directed towards the Ummah.

“that the People of the Cave” The word “kahf” refers to a wise opening in a mountain. The location of this particular cave has been disputed. It has been stated that it is near to Palestine; and it has also been said that it is in Andalus (in present day southern Spain), near Loja, Granada.

Ibn ‘Atiyyah mentioned that he had entered the cave, and therein were found some dead people and their dog. There was a mosque built on top of them. And nearby there was a building called “al-Raqim” the remains of whose walls are still found.

In that region of Andalus, there are some ruins that are called the City of Decius. But Allah knows best. However, Ibn Juzay has negated Ibn ‘Atiyyah’s claim, stating that it is unlikely to be true, due to the narration that Mu’awiyah passed by the People of the Cave and wanted to enter upon them, but refrained from doing so out of respect for them.

Mu’awiyah never entered Andalus, so the cave could not be in there. Also, the dead people found in Loja, Andalus were seen by people, and these people who saw them did not experience the fear that Allah mentioned regarding the People of the Cave.

The most accepted position is that the “Raqim” is a tablet on which the names and their lineages of the People of the Cave were written. That tablet had been kept in the treasury of the King, and was made of lead or stone.

The King ordered that their names be written on the tablet when their people complained of their absence.

It has also been said that “Raqim” is the name of their dog.

“…do you deem that the People of the Cave and the Raqim” meaning their story, “are Our most wondrous sign.

Meaning they are among Our most wondrous signs. The meaning of these words is, “Do you think that they are more wondrous than any of our other signs? That is not so.”

Even though their story is a break in the natural order, it is not more wondrous than the rest of Allah’s signs.

and among the most wondrous of Allah’s signs are what has already been mentioned of what Allah has created upon the earth, of kingdoms, and species, the first of which can hardly be numbered.

Rather, in comparison to all of that, [the story of the People of the Cave] is a very insignificant thing.

Qushayri has said, “He removed the cause of wonder from their attributes, through the signs that He attributed to Himself when He said, “of Our signs.” When a change in the natural order happens from the command of Allah, it is neither a rebuke, nor is it a novelty.

Then, Allah mentioned the first part of the story of the People of the Cave. He said:

“When the youths took to their cave” “fityah” (youths) is the plural of “fatah” which is a vigorous young man, brimming with youth. The meaning of this passage is, “And mention when the group of vigorous youths fled to their cave, escaping with their religion intact, and protecting their faith from the disbelievers among their people.” The leader of their people was Decius, as will be explained later in their story.

“a mercy” This is a special mercy that includes gentleness [from Allah] and safety from enemies.

“and grant us guidance in our affair” This means, “Rectify this affair that we have undertaken, in which we have separated ourselves and migrated from our people.”

“and grant us guidance” This means, “Grant us guidance which we will become rightly guided and upright.” Or, “Make our entire matter guided and correct,” similar to if one were to say, “I found correctness with you.” Or, “[Grant us] to take the correct path towards that which we seek.”

The origin of the word “hayyi’” [translated here as “grant [us]”] is the expression, “ihdath hay’at al-shay’,” which means “to renew the appearance of something.”

This is what being “best in action” means, when Allah mentions that He created the world “that We may try them as to who is best in action.”

And the following hadith has been narrated [from the Prophet ﷺ]: “The world is the wealth of those who have none. Only an unintelligent person gathers it. And only someone without knowledge shows it enmity.”

The hadiths on asceticism and encouraging people towards good are many, and have been collected in volumes especially dedicated to this subject. And Allah is the source of success.

There are many virtues of reciting Surah Al Kahf. As Hadith of Prophet Muhammad (ﷺ), “One who memorized the first ten verses or ayahs of Surah Al Kahf will be secure against the Dajjal.” (Sahih Muslim)

Reciting Surah Al Kahf every Friday becomes a source of forgiveness of sins committed between two Fridays. Surah al Khaf is one of the renowned Surahs of the Holy Quran. It comes with a lot of virtues.

This Surah gives the message that Allah protects those who are stick to righteousness and stay on the right path. Every Muslim man and Woman try your best to Read Surah AL Kahf on the day of Jummah or on the night of Jummah. Also, try to memorize Surah Al Kahf.

May Allah protect all of us from the Fitna of Dajjal and forgive all of our sins. Ameen 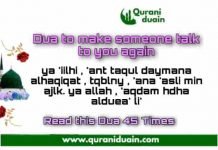 Powerful Dua To Make Someone Talk To You Again 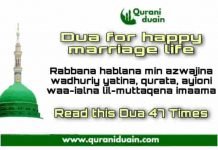 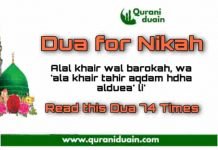 ABOUT US
Get all your problem solved with qurani duain and wazifa. You Can Consult Our Muslim Astrologer Molana Faqeer Ali On WhatsApp. In case You Need Personal Help From Him. Disclaimer* - No Guarantee is Given for the Best Results to All. Results may vary from person to person, owing to some uncontrollable reasons.
Contact us: [email protected]
FOLLOW US
© Copyright 2020 - 21 Qurani Duain All Rights Reserved
Consult With Me on WhatsApp